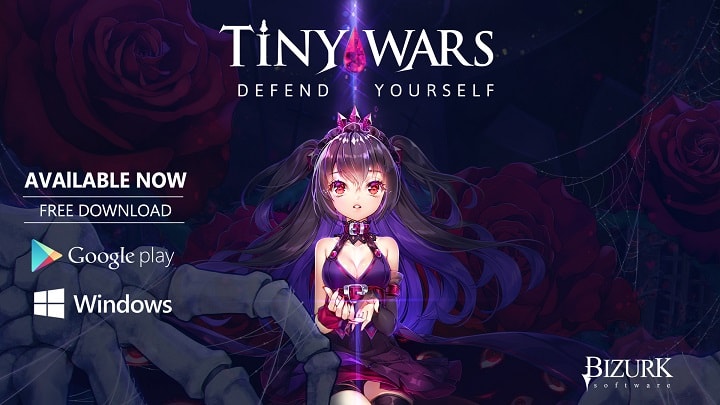 This is probably going to be the last time we talk about our gameplay prototype, after this, all of our efforts will be geared towards releasing our first fully featured story demo. What is meant by “fully featured” is that this demo should contain all of the elements that are expected to be present in the final TinyWars game. But before we can get some work done on the demo, we needed to do some major upgrades on the prototype. 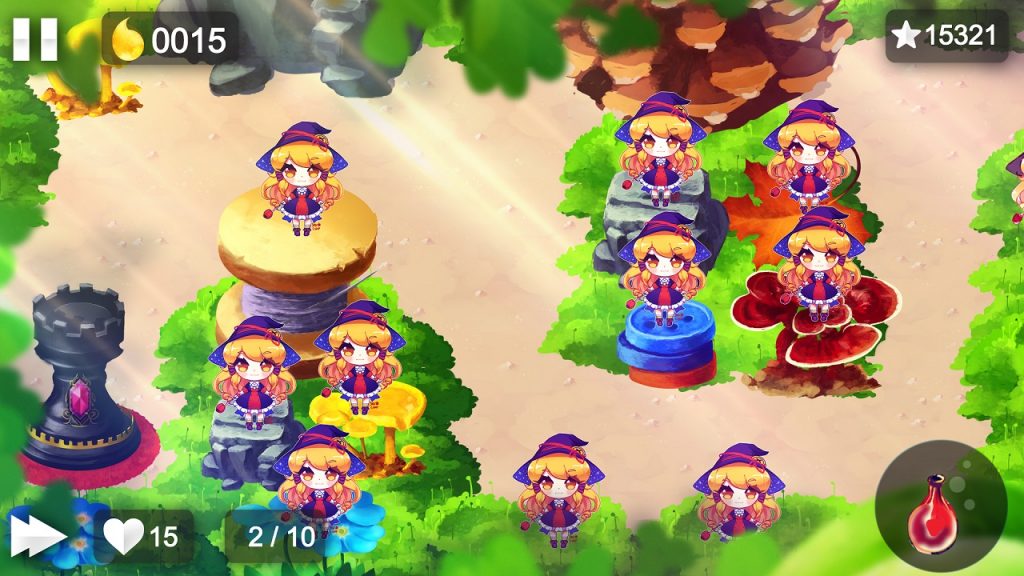 How the prototype currently looks.

The animations for attacks and upgrade effects were greatly enhanced. The whole experience feels alive and the world is interesting to look at. We hope that this graphical improvement will help make this game a beautiful piece of art to look at. Unfortunately the character animations are unfinished still. Having our character animations hand drawn, frame by frame, is a very time consuming project, but it does allow us to create animations and characters that I feel are more alive and fluid than those which use 3D models converted into 2D animations. Of course, time and money is the trade off. (We will be including the full animations in the upcoming demo.)

Many of our early players noted that the difficulty level of this prototype was extremely difficult. Though this did lead to some very interesting playthrough videos on youtube, I thought it was for the benefit of everyone who was introduced to this game that we reduced the difficulty bar significantly. I didn’t feel like we were doing any good to potential new fans by making the game practically impossible to beat. (Let alone beat with a perfect score which was something I challenged early players to do in exchange for a wallscroll.)

Our prototype still retains a certain level of difficulty, but if you want to get past the first 2 waves with ease, then take a look at the screenshot below. 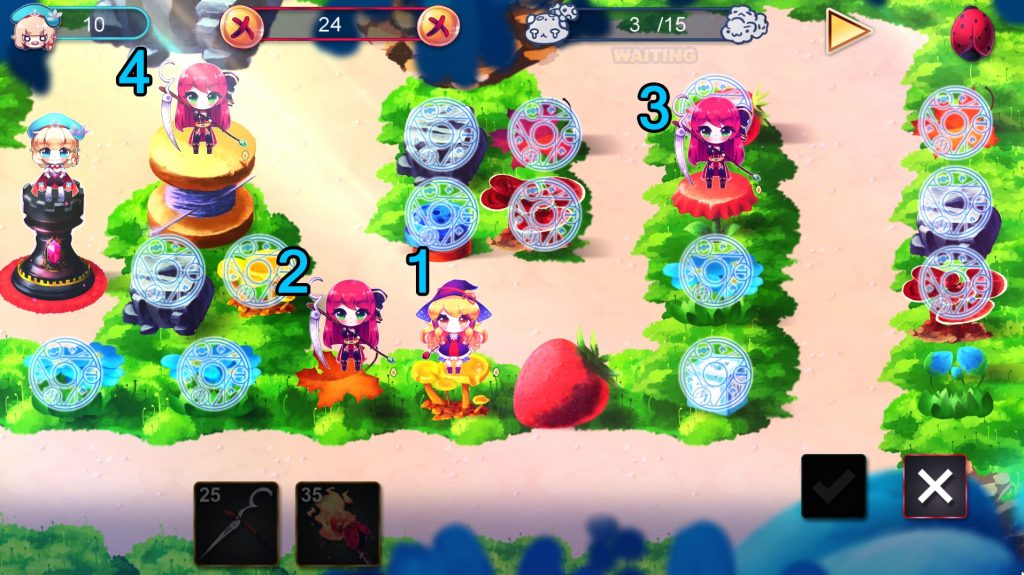 This screenshot shows what my field looked like AFTER I completed the second wave with perfect health. The numbers next to the units indicate the order in which I placed these units. If you want to pass the second wave without loosing a single point of HP, then it is advised to follow this cheat sheet above.

Is there anything else new about this prototype?

Not really. The visual enhancements were a HUGE project on their own and it really does change the entire feel of the game. There were a few animations quirks that were taken care of, but these are minor details. The whole experience comes alive through animation both in the characters and in the UI of the game. I encourage everyone who has already played earlier versions of the prototype to give this new one a try. In terms of the overall experience, while nothing has changed significantly in the story or waves, the whole experience has been enhanced, not only through animation but also through the difficulty. I believe the lowered difficulty (when I say lowered, it is still a challenge), will allow a wider audience to finally experience and enjoy this game!

This trailer features some beautiful music and some of the best visuals that we have gathered over the years of working on this project. Of course, this trailer does more to show what the final game of TinyWars might feel like: emotional, fast paced, and visually beautiful. This trailer also does do a good job of paralleling the philosophy we have with this game.

We are NOT interested in jamming a story down the players throat. If the player WANTS to experience the story and is interested in investigating interesting clues left in the story, we want to implement mechanisms to allow the player to uncover the story if the WANT to. Look at this trailer a second time. You don’t have to read the fast text that appears in order to see a trailer for an anime themed defense game, however, for those who are interested in seeing what lies beneath the surface of this cute looking game, luckily, the YouTube video player has mechanisms to allow you to read the text in the words if you really want to.

However, I leave this journey up to those who are actually interested in it. We’re not going to spoon feed the story to the player. If you want to skip the cutscene, then skip it. If you want to just play and experience a cute anime themed defense game, then go for it! We won’t stand in your way and I won’t let a story that the player is not interested in, get in the way of them enjoying the game. Everybody has different levels of interest and experience when it comes to a game like this, and we want you to experience our game the way you truly want to experience it.

This trailer reflects that philosophy…  of course, on a much smaller scale. And perhaps we don’t have much of a choice with only a 30 second ad slot.

Why is this update important?

This update marks our official departure from the Gameplay Prototype build. We can finally scrap a lot of old and inefficient code and organization that was specific to this tiny build and begin construction on the larger and more optimized demo build of the game, which will lead to the final build. The reason we want to make a big deal out of this final update is also because there will be a “dry period” during this time of heavy development where we won’t be releasing much new content or updates.

The new demo build requires a lot of work before it can be considered presentable. We’re no longer in the business of showing off concepts like this prototype, we will be building out a demo that represents the final game. And the final game should reflect that of a AAA project. We don’t want any animations unfinished, and we don’t want the GUI or graphics to have any downside. But finally we can begin to dive into the meat and bones of what TinyWars is all about.

By working on a demo that reflects the final game, we will be working on a demo that shows off the actual story of the game. And this is something I have been waiting a very long time to get started on. Having the story pre-written, we took a lot of time to build out this demo and give the players a gameplay experience; and now everything finally circles back and we can begin meshing the story with the game.

I hope we will be able to get a larger playerbase on this prototype. Out of 3,000 fans on our facebook page, our android game is only reporting 100 – 500 downloads. I would love it if we could get a much wider audience on this prototype now that the graphics have been ramped up to a level which I think is above average in terms of 2D indie games. I can’t expect a large audience unless the game is good, and I think this newest update for the prototype puts the current build of the game at a whole new level of quality.

Note: We understand that our audience is severely limited due to the lack of an IOS release. We will be working on that for the story demo!

Welcome to the story of TinyWars. The new story demo is going to be the reflection of the final project, likewise it needs to feel like a AAA title worthy of being called final. Much work has gone into simply designing the main menu! But even the menu design has a story to tell! I have put a lot of attention into the smallest details of this project and I hope our efforts will be noticed in the final project. 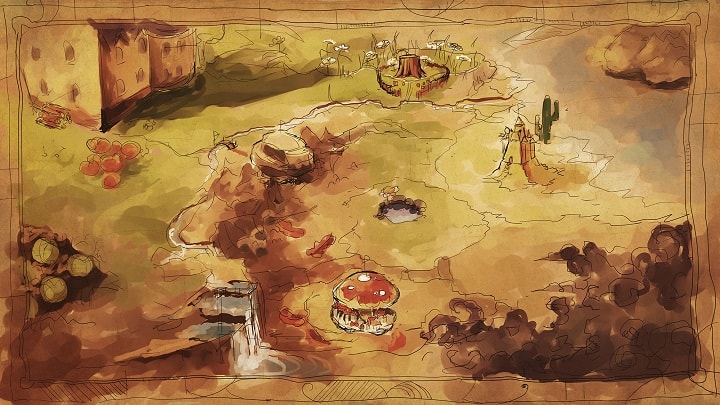 And this is the map of the tiny world which is riddled with adventure. I can’t talk much about this world or the things we want the player to experience in it right now, but we will be excited to discuss this in the future.

The coming months may be a bit quiet, but we hope to be able to show off some powerful visuals once the demo starts taking shape. You can expect to see some very beautiful visuals such as the menu screenshot above, only I hope to be able to show off some updated gameplay as well. We have several unique gameplay features that we are unable to fit into the gameplay prototype, but will be present in the new demo. The gameplay will be slightly different, while still remaining a defense game.

Thank you for following our development. We hope to be able to share some more exciting work of the new build soon!
You can keep up to date on our game by following the official TinyWars facebook page.